This is a deceptively delicious cake. It sounds like it’s going to be really simple and a bit whatever, but it’s really lovely – lemony and syrupy and moist.

The recipe is from Sweet Food (you know those short fat books, there are heaps, Bowl Food, Fast Food, BBQ Food etc). I was looking forward to making it for the blog, and since I’ve discovered some tricks for getting slightly better food photos with my little camera (I find food frustratingly unphotogenic) I was hoping that I’d get some good shots as well.

This was not to be the case. When I pulled out the recipe to make it, I realised I’d always made the cake in the wrong sized tin. Stupidly, I deviated from what I knew worked and decided to make it in the (slightly smaller) sized tin the recipe says to use.

I was a bit sus that it wouldn’t all fit, but I did it anyway. Even when I put it in the tin and it looked too full, I didn’t back down. I put it in the oven and stupidly thought that perhaps it would rise, like a soufflé or something. I thought that even though I’ve made the cake several times and I knew that it didn’t work like that. 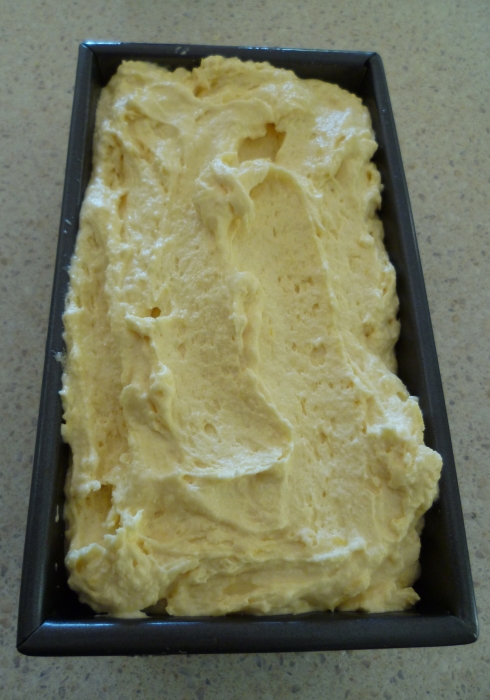 But it didn’t fit, and it dripped through the oven.

When I pulled the cake out of the oven I thought the drippings (which happened to be delicious) were the worst of it. It kind of looked ok.

Until I tried to get it out of the tin. Which was also when I remembered I usually use baking paper, but I didn’t this time cause it wasn’t in the recipe and I thought my fancy non-stick tin could handle it. Stupid.

Finally, I got it out. So sad. I consoled myself by eating more baked drippings.

It didn’t even have a good side 😦

That’s the last time I do what I’m told. Luckily it was still tasty, and when it was drenched in syrup, sliced up and put on a shiny red plate it looked ok(ish). Rustic, even. Really really rustic. 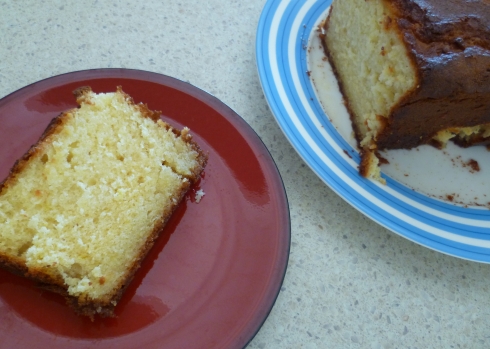 Lemon yoghurt cake with syrup
I couldn’t really say how many people this serves… I made it on Friday, now it’s Saturday and it’s almost all gone, but so far it’s only served three people. I reckon you could serve up to 10 people, if you cut small bits, for say a morning tea.

Preheat the oven to 180°C and grease and line a large loaf tin with baking paper.

Place butter and sugar in a bowl and beat until light and fluffy. Add the egg yolks one at a time, beating well each time. Beat in the yoghurt, lemon zest and vanilla. Fold in the flour, baking powder and bicarb of soda with a metal spoon.

Whisk the egg in a clean, dry bowl until stiff and gently fold into the mixture. Spoon into the prepared tin and bake for 50 minutes to an hour, until the top is golden brown and when you insert a skewer into the centre of the cake it comes out clean. Leave to cool in the tin for 10 minutes, then turn out onto a wire rack to cool.

To make the syrup, put the sugar and cinnamon in a small saucepan with 1 cup of water. Stir over medium heat until the sugar dissolves. Bring to the boild and add the lemon zest and juice. Reduce to simmer for 5-6 minutes. Strain.

Put the cake on a plate and pour the syrup over the top. It will probably pool on the plate, but leave it until the cake soaks it all up.